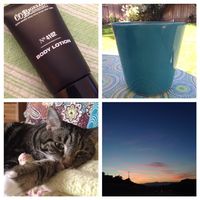 *Our favorite Vandy girl will be home for summer in a few days! Oh how we have missed her.
*There's something in this little thing of lotion that I swiped from The Hotel Monaco in San Francisco that makes me relax and fall asleep right away. I think it might be the C.O. Bigelow Lime & Coriander #1536 lotion in disguise. Whatever it is, I love it.* Empty pots to fill. What to plant? Decisions, decisions.
*It's been almost a year since we brought Zibby home and I can say for sure she totally loves us now. It's hard to be upset about anything when a cute kitty is snuggled up to you.
*The sunsets have been amazing lately. Orange and pink and fluffy white.

What are you grooving on? 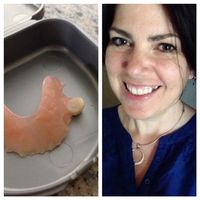 Last week my tooth broke. At first I thought it was just a crown popped off but a trip to the denist confirmed my worst nightmare: an implant is required. Of course because I am me, it is a visible tooth near the front. Also because I am me, it comes during a very stressful time when my husband is about to undergo surgery. How am I supposed to stress eat chips and salsa now? It's hard to chew with that tooth gone.

The dentist made me a new flipper so that my other teeth won't move over while I go through the whole implant process. The thing is, it doesn't fit properly yet because of the tiny bit of tooth still there. And while it doesn't fit properly yet, it does feel exactly like the one from before- like having the back of a plastic spoon pressed against your tongue at all times. I can't yet go 5 minutes without getting queasy and drooling.  The entire time I am having conversations with people I can't even pay attention to anything they are saying because all I can think about is my tongue being pressed all weird against the flipper. Forget about driving, I get car sick immediately. It is gross and exhausting. Trying not to lisp and drool at the same time is hard, man.

I know it is totally distracting to talk to people when they have a missing tooth. Hell, being toothless is a halloween costume! People can't help but stare that the gaping hole. I remember last time people would tell me they did not care if I was drooling or toothless, they still wanted to see me. Or they'd say it's just a tooth. But it is not just a tooth. That is the thing.  The thing I remember most about that time was how hard it was having the flipper in at all times so my existence would please other people. Age has brought me clarity and even less fear of saying no. I'm gonna be flipperless until I am not. I'm probably gonna smile less (in public) on days I am extra self-consious. When I feel laughy I will post those photos and stories, too. So, this is me 45 and down a tooth.

What has me most worried is if the toothless issue is repeating does that mean I should cover my other eye to ward off spiders?

When I was in art school, one of my favorite subjects was abstract expressionism. I loved learning and seeing how the artists expressed themselves with color and texture. Even today, I still love going to museums to see art work in person. Often when we see art on the internet, we do not see the energy in the artist's brush strokes or the little details that let you know the art was created by a person. I love seeing lumpy bits of paint, crinkled paper, smudges. I love the signs of life. 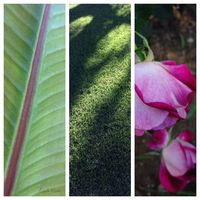 Spring Became Summer is one of my most recent paintings (finished last night!). I wanted to capture the mood and textures in our garden from my perspective. I spent a good bit of time just looking at what was going on in our space. Shadows, lines, blur from the wind, cool colors. I was full of inspiration. Most people do not think of black being a typical garden color, but I see it everywhere in the shadows as light dances around. I worked on this piece for a couple days and now that it is finished, I totally see my garden in it. I think it is really fun to see the finished work with what inspired it. 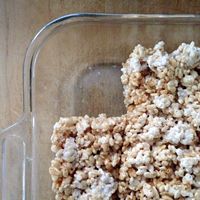 One of the blogs I read religiously (usually while treadmilling)  is Sally's Baking Addiction. I bought her book the second it was available in kindle format but then got distracted by life and did not have time to read it.  I finally had a moment to read it and to my surprise there was a recipe for salted caramel rice krispy treats right there! I could tell by the photo that these were the marshmallowy type I like.
I won't reprint her recipe here since I do not see it on her blog, but in any case, I didn't really follow her recipe exactly. I had Trader Joe help me. I can tell by the recipe that Sally's way would be amazing, though. I think baking is like art, you gotta use what you have when the mood strikes!
I have been fiddling with recipes that I like to adhere to my low cholesterol lifestyle.
The ingredients I used:
1 10 oz. bag of Jet Puffed Marshmallows
41/2 - 5 Cups Rice Krispies
1/2 a jar of Trader Joe's Fleur de Sel Caramel Sauce 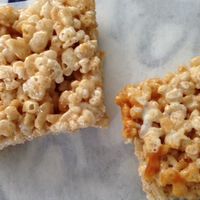 Usually rice krispy treats call for butter but as you can see, I didn't use butter. I have been making my rice krispy treats without butter and they turn out just fine.  I microwaved the marshmallows 45 seconds (in a giant bowl), stirred, then microwaved another 45 seconds until all melted. I poured in my rice krispies and stirred until it was the consistency I like (about 4.5-5 cups), then stirred in 1/2 a jar of the caramel sauce.  Sally makes her caramel sauce from scratch and her recipe is in the book (YUM!). Half a jar of Joe's caramel sauce is about 12.5 grams of fat and 25mg of cholesterol (and worth it).
When the marshmallow- rice krispies-caramel combo was mixed to the amount of swirly I like, I spread the mix in an 11x13 pan that was sprayed with the Trader Joe's version of Pam. I wish I could say that Dustin and I waited until the bars were cooled to try, but that would be a lie. Heaven! They were good warm and even better once they cooled. They did not last long here. I think these would also be wonderful with some coconut tossed in the mix. 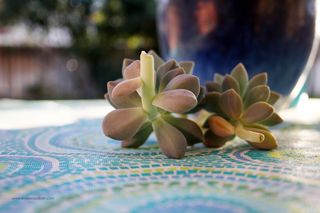 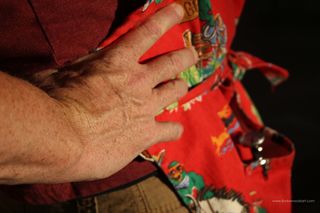 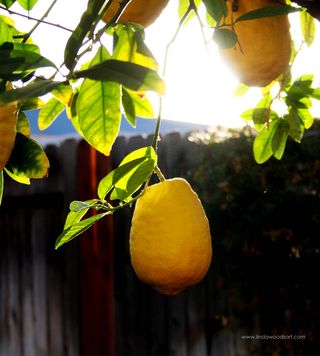 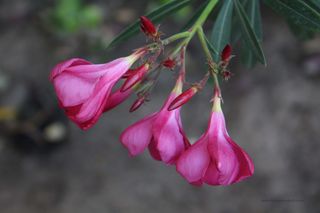 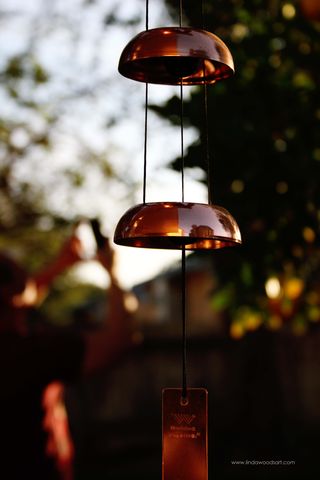 1. My succulent garden from mostly clippings is doing great!
2. The man of the house always wears a special BBQ themed apron when BBQing.

3. Our giant lemons are ripening. I love how they look more than how they taste.

4. I know a lot of people think of oleander as the plant that grows by the freeway, but I love the pink oleander! It is so pretty and delicate.

5. Still loving the Flat Iron steak from my Boyfriend Joe.

6. I normally am totally irritated by wind chimes but this one is really soothing and looks pretty in the sun. I discovered it at an OSH going out of business sale but I see it online at a few places. It's a Woodstock Temple Bells chime. 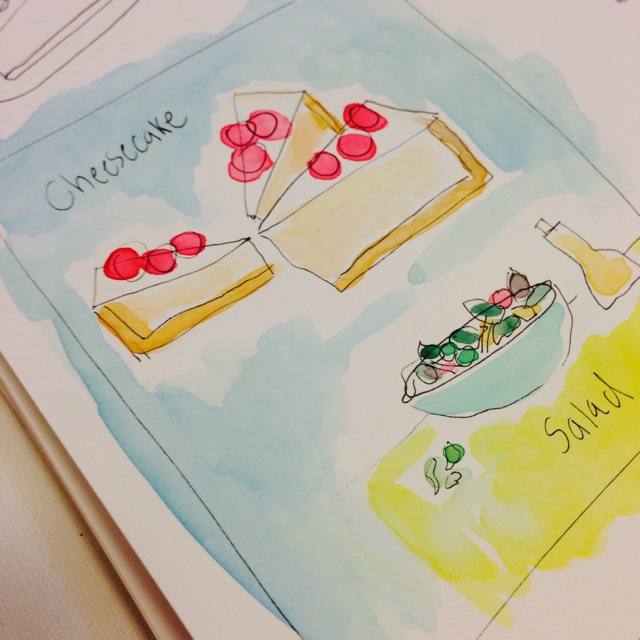 What I want to be eating: Tall cheesecake with thick, buttery graham cracker crust.

What I am eating: Salad.

Lately I have been doing a lot of my journaling late at night or while I eat dinner (major multitasking going on over here).  I do not care at all about perfection or perspective when doodles are involved. It's the process I enjoy. It stops being fun the moment you want to be perfect. My journal is where I can be carefree!

*Note: due to the typepad issues lately, some posts may appear in duplicate.

Yesterday I was posting progress shots of a big abstract painting I was working on. I had to stop where I was because I ran out of white paint. My painting was not yet complete in my eyes and imagination, but someone emailed to say they wanted to buy it as is. Isn't it cool how people connect with things? I didn't want to let that sweet person down, so I made the painting available (in its current state) in print and print on canvas options (here). It's funny because the more I look at it, the more I think I am done. That is the great thing about creating and self-expression- sometimes what you plan and what happens are totally different. I love that. 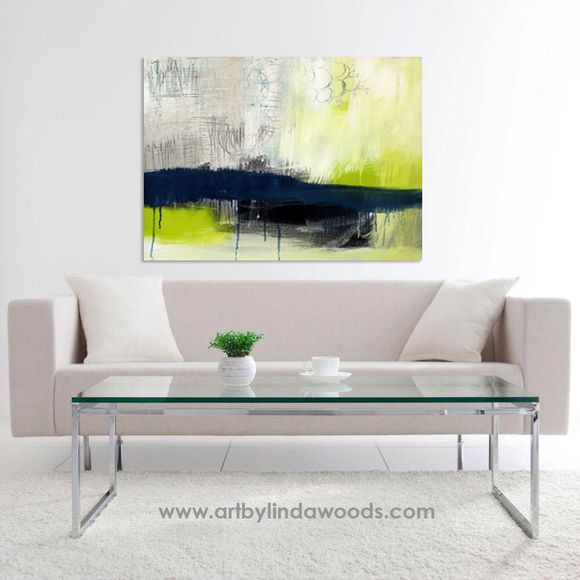 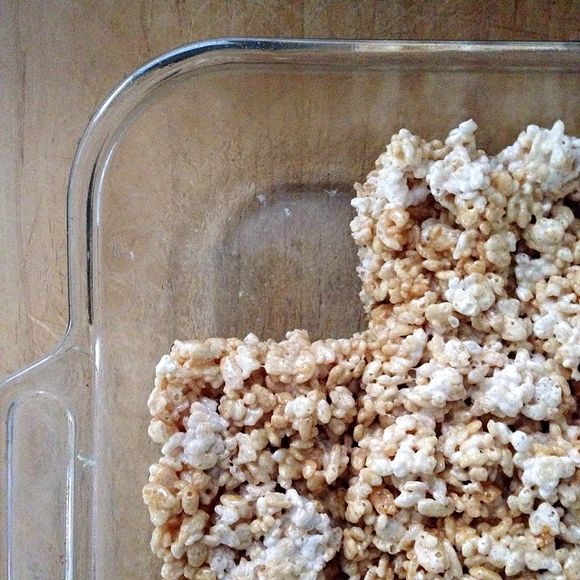 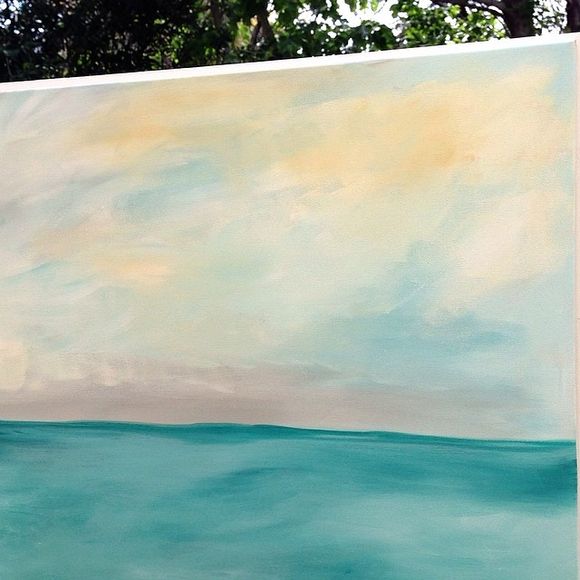 Breaking in the new easel which now easily rolls through all of our crazy doorways. This painting is 18x24. What will it be? I'm inspired by our weather today. #iamartblog from Instagram http://ift.tt/1llL5td 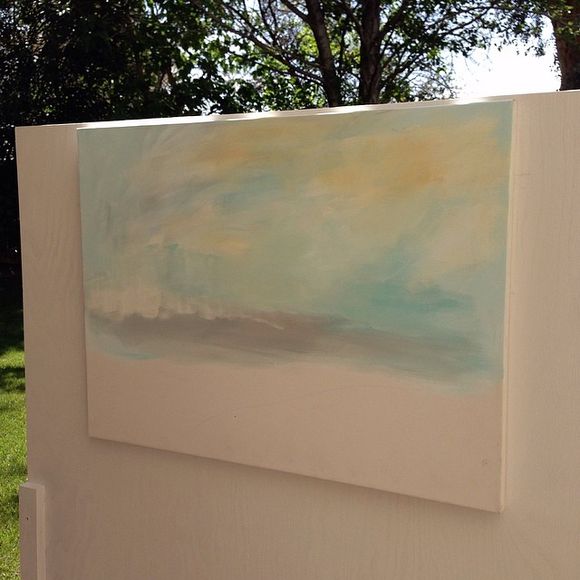