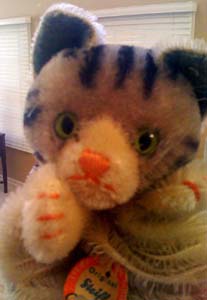 When we were kids, Karen had a stuffed animal Snoopy and a tabby cat hand puppet that she loved. They were her favorites! She carried Snoopy around by his neck, which I am sure would've been really cute in photos. She called the puppet Kitty Baby and I think it used to scare the hell out of me, just like this orange bean bag doll I used to have. Actually, I still have it but it's hidden in a box so I won't have nightmares. Karen eventually gave me her beloved Snoopy and she kept puppet Kitty Baby. I still have Snoopy and she still has Kitty Baby.
When Annie started coming around here, the first thing I noticed was that she was a Kitty Baby cat! A real LIVE PUPPET CAT! Karen's favorite style of cat! After she died that awful death, I decided that the only way I'd ever get another cat is if she looked just like* Annie. I didn't think the odds of that would be very good so that was fine. That shows what an idiot I am because brown tabby LIVE PUPPET CAT styles are very common. 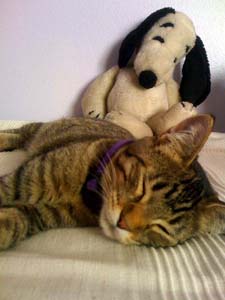 Along came Suki. Another live Kitty Baby! Karen rushed over to see her, they fell in love and now I have Karen's Snoopy and the live version of her beloved puppet. But she has her kids which she said I could have when they turned 13 and got all moody and talk backy but that hasn't happened. I think we're even. Let the photos begin.

Photo one: The original Kitty Baby

*Keep in mind, we named more than one of our dogs Sam. We stick with what we like.

One:
There's a feature interview with me on the Aaron Brothers page at facebook. It is viewable if you don't have facebook (yay!), but if you are a member of facebook, please do comment on it there. You will see my curse is continuing because the interview is with an S-less Linda Woods. Ah! A good sign indeed. Here it is.

Two:
The only available copies of Visual Chronicles available in the entire world are what you see in stores or what we have. The publisher is all out of books and will not be printing more. I have some for sale in my etsy shop (signed by me and Karen, the S is free) and some in the back room (I'm only listing 5 at a time). If you want Visual Chronicles and see it in stores or want a signed copy, buy it while you can. Here is my shop. Journal Revolution is still in print and I do have signed copies of that in my shop as well.

Three:
Mercury is in Retrograde this weekend until the end of the month! Drive carefully, back up your computers, be cautious, expect men to act like they have worse PMS than we do.